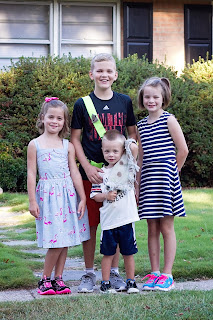 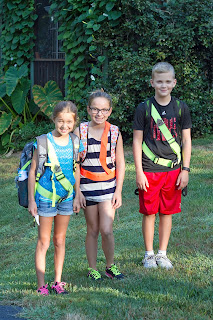 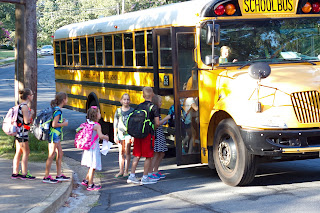 So today was a big day!!!  The first day of school and the first time in 3 years that the kids weren't starting in a new school.  They were so excited that they would know people in their classes and that they would have friends in other classes that they would see at recess!  Oh the things that most people take for granted!!!
Aidan is in 5th grade this year and that means that he gets to be a bus patrol.  It's a very sought after 5th grade job and he even went to a week of police camp to get ready.  He is also very happy with his new teacher and with the kids in his class.  He has a new mix of kids and it will be great to give him an opportunity to become closer with some other people!
Emmy is in 3rd grade and has a great teacher as well. She is lucky to have some friends from her class last year, friends from church and friends from lacrosse in her new class.  She loves that they will be studying Spanish this year and that art and music have been increased to three times a week!
Aoife is in 1st grade and so far the most awesome thing is that she gets to take three books out of the library at a time instead of just two - like in Kindergarten!  She seems to love her teacher and is having fun with new friends.  She loves to see her Kindergarten friends on the playground but seems busy making new friends in class as well.
I think that this year is going to be great.  They deserve it - they've put up with a lot already.  Having a little stability for a few years will be so good for them!

Here are some pictures of them coming off of the bus - all smiles and hugs for Declan!! 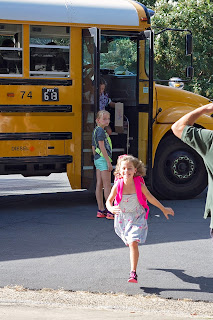 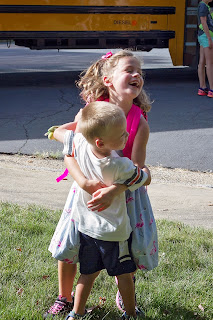 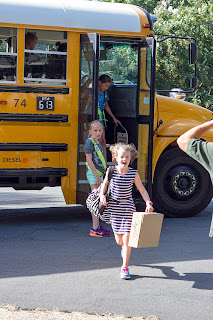 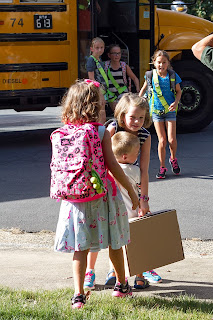 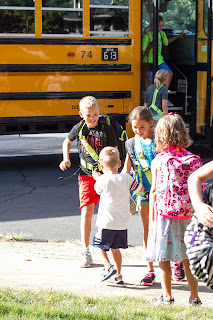 Visit my other blog

I never wore the uniform, no medals on my chest.
The band, it doesn't play for me, I am not among “the Best.”
I do not march in cadence; I do not rate salute,
I stand among the silent ranks, our devotion absolute.
If you've not worn my shoes, you do not know my story.
I live a life of sacrifice, my reward a private glory.
I've wept many silent nights away,
and I've kept the home fires burning.
I've worried and I've waited, as world events were churning. I've moved more times than you could fathom,
left more people than you've known.
I've planted gardens 'round the world,
very few that I've seen grown.
I've grieved with new-made widows,
and had my share of scares -- when a ship or plane or man was down, and all I had were prayers.
I'm not asking for your sympathy, (although appreciation can be nice) I did it quite on purpose --I chose to sacrifice.
I'll tell you a secret now, one you'd never guess.
About the one glory that is mine,
it's just enough -- no more, no less.
When you and I stand together as our national anthem plays, I'll fill with reminiscences of how I spent those days.
I'll know the pain and joys again,
I'll know that freedom isn't free,
I'll know I've helped to pay the price –
and that the anthem plays for me.